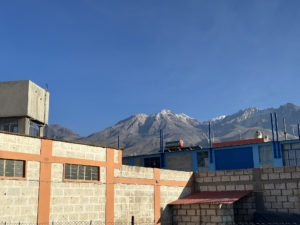 I bring you greetings from the beautiful city of Arequipa. The sky is clear, and the days are sunny and warm. There is a sense of the “calm before the storm.” There is, however, a foreboding in the air.

Our plans to visit the Casa Girasoles homes in Ica and Urubamba did not come to fruition. The transportation strike (more accurately referred to as strikes – as they occur with little in the way of central organizing) have made it very challenging to travel outside the main cities.

We arrived in Arequipa yesterday afternoon, and the first sign that things were different was the significant presence of the military at the airport on the tarmac. As we exited the airport, we met an even more impressive brigade of police with riot shields lining the roadway entering.

The official communique of the government announced 17 more deaths from the protests. Clashes between police and protestors have escalated in the Puno area, with the city of Juliaca becoming a hotbed of conflict.

The rising death toll comes amid growing protests calling for President Dina Boluarte to resign, Congress to be dissolved, and former President Castillo to be freed from jail. A vote is scheduled for today in Congress. The vote will decide the future of the current administration. Suppose Congress moves forward with a no-confidence vote and amends the constitution to allow early elections. In that case, it seems unclear whether these concessions will appease the protestors.

Last night we shared a pizza in a small restaurant near the Plaza de Armas. A large group of rather boisterous protestors filled the streets and marched in solidarity for peace. The vote in Congress may decide if the protests move in a more peaceful direction or turn an otherwise challenging situation upside down. We will see. Stay tuned.