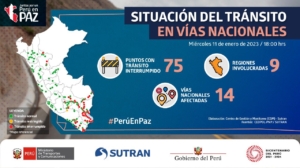 Road closures and blockades around Perú.

Yesterday the Congress of Perú passed a confidence vote in the new government. The Congressional vote granted the vote of confidence to the ministerial cabinet headed by Alberto Otárola. This seemingly insignificant act of Congress has already brought wide spread demonstrations and increased agitation amongst the protestors.

Whatever hope there was for a peaceful resolution to the political and social unrest that began after the inauguration of President Dina Boluarte in December following the failed coup d’état of former President Pedro Castillo, have left 46 deaths. Around the country protestors have taken to the streets – blocking roads and marching in solidarity. The police and military have been in hours long standoff with a group of protestors attempting to take control of the Cusco airport. Differing groups of protestors have erupted into violent clashes with one another in the Puerto Maldonado. The media in Perú are now referring to the social and political unrest as Perú en crisis.

The people suffering the most are those that have long-lived in extreme poverty. The Peruvian Ministry of Economy estimates the impact from the protests to exceed S/.300 million so far this year. Some of the poorest regions in the country are also areas with the most protests and the greatest disruption to their economies.

What happens next is impossible to know. One thing is clear, the situation has gone from bad to worse. Please keep Perú and the Peruvian people in your thoughts.

The Calm Before the Storm Good is good, and we can do more – wayne centrone
Scroll to top