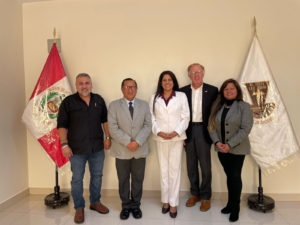 HBI’s Medical Director, Dr. Robert Gehringer, just returned from a month-plus long trip all around Perú. Traveling with our colleague, Srta. Lidia Ruiz, Dr. Bob made his way through a number of trains, planes and automobiles. Check out the following brief excerpt from his travel diary:

So after a 5-6 year hiatus, I’m finally back in Iquitos in the Amazon, the world’s largest city absent road or rail access.  In this city of 400,000 it’s amazing to recognize that almost everything, from the concrete and steel I-beams to plastic waste baskets and beverage straws, all arrived by boat, generally up the Amazon from Brasil.  Stepping off the plane a wall of humidity greets you.  Last night while on the malecón sipping a cold Cusqueña after a light rain shower the relative humidity was actually 99% according to my weather app, air almost water.  With the enthusiastic support of Rosana Chumbe, the new regional decana of obstetras (midwives), we’re trying to resurrect their pandemic challenged inactive newborn resuscitation training program.

We rode into the city in a mototaxi, the first of multiple excursions.  There must be thousands in Iquitos.  Small underpowered motorcycle in front that widens to form a bench seat over the two back wheels.  They haul everything and actually are a pretty cheap and efficient way to get around.  Open air with a roof for the rain in this always warm place, weaving in and out of traffic and shooting through intersections as long as the red light had only recently turned.  I much prefer them to taxis.

Sunday evening on the malecón, the walkway along the broad Río Itaya adjacent to downtown, all was alive with activity.   Pandemic masking seems a bit more lax here than in other Peruvian cities, though quadruple anywhere in the midwest.  Families out for the evening, street food, vendors of balloons, jewelry, candy, street performers, tarot card readers, whatever.  I love the energy.  The flip side is that poverty is still omnipresent with no shortage of folks asking for a little money and looking like the need it.  Iquitos didn’t seem as creepy as in past visits: no long beckoning looks from ladies of the night, and fewer old gringos (who unfortunately look like me) hanging out to sample the local sex trade.  As the distinctive aroma of marijuana occasionally drifted by and regatón pounded away in the background, Lidia, my HBI colleague and my computer and online training expert, and I enjoyed dinner under a large table umbrella at El Mesón, a couple small lizards nervous on the adjacent wall.  Our classic food from the jungle included cecina, cured pork with a bacon taste and none of the fat.  Tacachos, balls of mashed cooked plantain with bits of crispy pork, spices, etc.  Lagarto, local cayman, like a McNugget (yes, tastes like chicken).  Chonta, ribbons of palm heart, like very long thin fettuccini.  And yuca, manioc root cut and cooked like french fries, punctuated with a delicious hotsauce of cocona, a tropical fruit.  All enjoyed with a second cold Cusqueña, the bottle sweating in the heat, as was I.  Not in Kansas, Dorothy.

Lidy always wants to practice her English and me my Spanish.  I’m in Perú, afterall.  It seems that whenever I’m with my bilingual Peruvian friends, the conversation turns to the commonality of food and the idiosyncracies of Spanish and English, so we covered both, flip-flopping languages, then indulged in shared observations of the idiosyncracies of our coworkers and today’s workshop students.

After unusually smooth travel to 9 cities, we arrived at the airport today two hours early to find that we hadn’t been notified of a schedule change and our flight had just departed.  Rebooked for late tonight, ergh, we salvaged the day with lunch at a unique restaurant floating in the middle of the Río Itaya.  More cecina and chonta plus paiche, a huge freshwater fish from the Amazon, all in a sweet maracuya sauce, with camu camu juice to quench the thirst.  It’s tough to find camu camu at the Menasha Piggly Wiggly supermarket.   So, Iquitos revisited, 2022.

About and hour into my flight from Lima to Atlanta after a month in Perú traveling among 9 different cities to resuscitate, post-pandemic (hopefully the worst of it), the Regional College of Midwives training programs. It generally went well though predictably a few trainers have dropped out and there has definitely been some learning loss since early 2020 as they hadn’t been able gather in groups to do any workshops.  Two steps forward, one back.  My wonderful HBI colleague, Lidia Ruiz, and I hopscotched by air, bus, and car through Lima, Arequipa, Huánuco, Tumbes, Piura, Chimbote, Cusco, Cajamarca and finally Iquitos and back to Lima, covering the coastal desert, the Andes, and the Amazon.   A few random impressions along the way.In Lima, the work was mostly to reaffirm our 8th year of connection with the national College of Midwives as well as to establish new planned relationships with the national College of Nurses, the Peruvian Society of Pediatrics, the National Childrens Hospital, and the Universidad Sete Septiane with its several campuses around the country.

It seems we’ve been able to establish a bit of program and organizational credibility, as each of these potential Peruvian partners is moving forward at different stages toward a formal relationship with HBI.  The Spanish saying is “Al dicho al hecho, hay un trecho.”  Literally translated, “From said to done, there’s a trench.”  We’ll see where it goes.Fresh wonderful seafood!  It’s said that some housewives will refuse to buy a fish in the market if it isn’t still gasping.  I can’t get enough of it, from great sushi and sashimi last night in Lima, ceviche in Callao on La Punta, to mahariscos in Tumbes.  Mahariscos was new to me, cooked mashed plaintains with a variety of seafood mixed in, especially shrimp, spiked with a tasty salsa ahi (spicy).  I’m a fan.

On Sunday afternoon in Piura, the older waiter brought us two whole fish, freshly caught, and we chose between a mero and some kind of sole.  We picked mero and he then fileted half and served us ceviche and then roasted the rest of the fish for our entree, appointed like a piece of art.  Buenazo!  All this thanks to the abundance of the cold Humboldt Current flowing north along the coast.Added to 11 flights, our land travel was limited to the coast from Tumbes to Piura to Chimbote to Lima.  The first leg was an easy 6 hour daytime bus ride to Piura.  I now veto any suggestion of overnight buses, as I’ve had more than enough of those.  Piura is a fairly large city, almost always hot and sunny, la Ciudad del Sol.  In 1516 it was Spain’s first city in South America thanks to Pizarro and his band of invaders.  However, well before the Europeans imposed themselves, there were sophisticated cultures here with ruins dating to 3000 BC, contemporary with the cultures in Mesopotemia, the Nile Valley, the Yangtze Valley, and Meso America.

We stayed at the Hotel Los Portales, a classic old hotel at the corner of the Plaza de Armas, the original building constructed as a hospital in 1678, then converted to a hotel in 1912 with a “new” addition in 1943.  My corner room, overlooking the Plaza had tall windows, 15 foot ceilings, beautiful wood floors, and 8-9 foot doorways, not to mention a very comfortable bed.  The bar, Marquéz, is my favorite in all Perú.  Lovely wood paneling, old black-and-white photos, comfortable soft chairs, and barmen who were real pros.  They make a great Capitán (like a Manhattan with Pisco).  We hosted the midwife trainers there after our two days of work together.  They were a fun and baudy bunch as with the second round the laughing conversation tumbled to dildos and little bottles of aphrodisiac scents, neither in my experience.  I think it’s because the midwives spend so much time working somewhere below the waist.

The next day in a private car, Montalvo took us south for 9 hours to Chimbote.  Montalvo was a quiet 30-something guy who drove predictably but rapidly, topping out a few times at 92 mph, but at least on straight divided highway.  On the two lane roads we weaved in and out, often passing in spite of an oncoming motorcycle or mototaxi.  The unwritten rule and expectation is that the smaller vehicle will slide to the side when confronted.  Hopefully, everyone gets the memo.  The coastal desert was stark, often just sand and rocks to our left and the ocean on the right.  Further south large agribusiness farms were green and irrigated with everything from asparagus to rice to grapes and avocado trees.  The small cities and little towns along the way tended to lean to the ocean, often a fleet of small 30 to 60 foot commercial fishing boats anchored in a bay, nets and rigging at the ready.  The towns had a certain unkept sameness, so many dusty buildings, rough red brick with sentinels of rebar extending skyward from the roof in hopes of better days, another floor to be built when funds allowed.

Currently, Perú’s vaccination rate far exceeds the US and COVID prevalence is blessedly low.  Though masking is still almost universal, even outdoors, they’re beginning to lighten up.  Fist bumps to handshakes to cheek touches and hugs.  Hooray!!Happily home later today, and planning no thoughts of newborn resuscitation for a while. 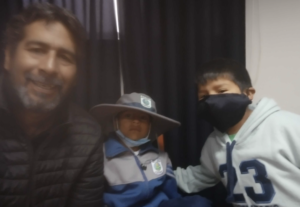 Every couple of weeks or so, I receive a call from a loyal supporter. He calls to chat about the work of HBI – and to encourage me. Let’s call him Jim, as he has not permitted me to use his real name.

Jim is a super nice guy. He always tells me what a great job HBI is doing and how much he enjoys supporting our efforts and watching our progress. The other day on our call, he said that it just seems like things are “too hard” and that they “shouldn’t be so hard.” Jim’s right – things sure as heck are hard . . . but I am not sure they are supposed to be anything other than challenging.

One of the parts about not-for-profit work that makes it so hard is that we rely on soft funding – donations, grants, foundations, to keep our work going. We don’t make a product to sell. We don’t have a direct service we can market. We are selling and marketing our efforts to address some of the biggest challenges on the planet—things like homelessness, hunger, climate change, and child welfare.

Sure, several NGOs meld fundraising with “for-profit” activities, selling merchandise, spinning a portion of program activities into the pay-for-services realm, and even shopping their technical assistance and consulting services. These are great alternative revenue streams for not-for-profits . . . and HBI has tried its hat at a few of them. The problem, if our work is focused on addressing the most underserved populations and creatively engaging the most marginalized of issues – we can’t also be accountable to the brass ring of profit.

I guess what I am saying is this . . . this is hard work, and it’s supposed to be. There is nothing easy about managing an almost million-dollar budget – with donations or widget sales. HBI is in a unique funding cycle at this time. It’s one of the phases that every not-for-profit goes through. We are cash strapped. For HBI, this cash-strapped scenario means we have a pipeline of money we have predicted will come in throughout the year – grants, foundations, events, and private donors – and the money hasn’t arrived yet.

So this leads me to a request – if you are considering donating to HBI, now is the time. We will make it through this phase – we always do. It’s a real privilege to be on this journey with all of you. It is, however, a time when the work of running a not-for-profit feels extra hard. Thank you, as always, for all your trust and confidence in our work.