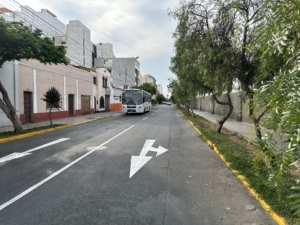 Rush hour on the streets of Lima.

I arrived in Lima a couple of hours ago. Leaving the airport in the taxi, I expected to see a large police and military presence on the road. I expected to see visible signs of unrest. Instead, I found an eery calm.

International news outlets have talked about the widespread civil unrest around Perú – with the most significant confrontations occurring in Arequipa, Ayacucho, Apurimac, Cusco, Moquegua, Madre de Dios, and Puno. More than 25 people have died, and hundreds have been injured. There was a lot of speculation about what the city would be like now that the protesters have regrouped and taken to the streets in the new year.

The main instrument of the protestors are paros – or strikes. With the transportation strike being the most effective. It is working. The city is on holiday. I just went for a run, and the customarily congested streets of the city are all but mellow. It feels that way, at least.

Many businesses are closed without workers to attend to customers and manage shops. Tourism is all but on-hold, and the feeling is that of the visitor-less pandemic. Livelihoods are being upended. The protests will have devastating impact on the 70+% of the Peruvian population working in the informal sector and struggling from the effects of the pandemic.

What does all of this mean? In many ways, the current social and political situation in Perú points to significant change. Change in the old guard. Change in the status quo. Change in politics as usual.

I am still determining where this change will lead. It is too early to say. One thing seems clear . . . change is coming. We will keep you posted.

A Month of Thanks – Day 31: New Beginnings The Calm Before the Storm
Scroll to top