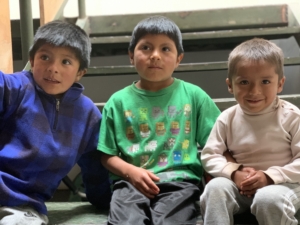 One of the greatest gifts each day brings is the opportunity for a new beginning.

A kind neighbor had always been there for Marco and his brother. She would feed them when his mother would leave for long periods and not provide any money for food. She would check in on them, ensuring they were safe and warm in the cold rainy months. One day this kind neighbor noticed something very different – and she went to the local judiciary to file a report of child endangerment.

That was when Marco and his little brother came to live at the Casa Girasoles. From the very first day – Marco talked about how much he wanted to go home. Marco spoke about how his desire to be with his mother. He knew of her “sickness” and the changes that would happen when she was drinking – but he also knew she was their mother and wanted more than anything else to know her love.

One day Marco ran away. A few hours quickly turned into a whole day – with no word of his whereabouts. The police found Marco at his mother’s home (a small four-wall hut with a dirt floor and an open-pit fire). She was drunk and rambling about letting him stay or go or whatever he wanted to do. Marco cried with the police and pleaded with our staff to let him stay with his mother. He hoped this time things could be different. He longed for a new beginning with his mother.

Each day offers an opportunity for new beginnings. But what about when it doesn’t? We must develop the kinds of programs and projects that work with the total needs of the children we serve. We must build models of care led by the voices and experiences of children like Marco. We must do more than respond to a challenge or problem – we must create new beginnings. This is the work of Health Bridges.

Today is the final posting in our Month of Thanks campaign. We appreciate all the messages and well-wishes we have received over the past 31 days. Please stay connected to our work – and #BetheBridge

A Month of Thanks – Day 30: Resilience An update from Perú – wayne centrone
Scroll to top