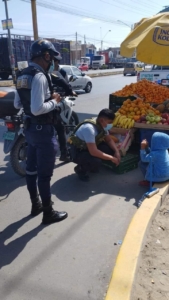 Wilfredo (not his real name) must have been four or five when he came to live with us at the Casa Girasoles. The thing I remember about him the most was his deep eyes. He had the eyes of a person 40-years his senior.

Wilfredo had seen a lot in his years. Growing up in extreme poverty, he and his four siblings had only ever known hunger. Wilfredo’s father was absent at best and abusive when he turned up at their squatter home after binge drinking. Even at the tender age of 5, Wilfredo spent much of his time on the streets alone.

When he came to live with us, he was referred by the local police department – as they found him hanging out at the market late one night. When they asked him where he lived, he said he didn’t have anywhere to live.

A case was immediately opened to determine the details of little Wilfredo’s life. The social worker visited his father and mother. Spoke with neighbors. She even interviewed his siblings. The court decided Wilfredo was better off living in the Casa Girasoles. He settled into his new home nicely.

Those eyes made it hard to forget the trauma that existed deep inside the little boy. One day his father came to visit. He was drunk. He made a big fuss and threatened the staff if they would not allow him to take Wilfredo home with him. The police were called, and they ushered him away without much fanfare. A few months later, his father returned. This time he had a court order that allowed him to regain custody of Wilfredo.

The day he left was hard on everyone. The staff wanted to do everything they could to protect little Wilfredo. I could feel his pain. I remember receiving a picture from the Director of the Casa Girasoles. It was his eyes.

We lost touch with Wilfredo for a couple of years. The social worker would visit the family, but they had moved. No one seemed to be able to keep track of them.

Then one day, the police found Wilfredo on the streets. A shopkeeper reported him and mentioned that he had seen the boy sleeping on the streets near his business for a few weeks. Our staff saw a news story on social media and immediately recognized Wilfredo. Our Director called child protective services and arranged for Wilfredo to be brought back to the Casa Girasoles.

I guess that is the hardest part for me. The time. I just keep thinking that things could have been different. Wilfredo is back in a safe, loving, healthy environment. But what about the thousands of children who are not. What about the families on the edge of poverty, mental illness, or addiction – families most vulnerable to losing a child to abandonment. What about them? Knowing that things can and must be better for vulnerable children and families is what drives us. Looking into Wilfredo’s eyes reminds me that we still have a lot of work.