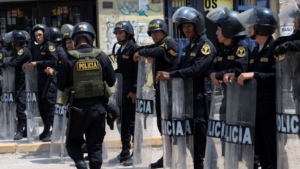 Yesterday hundreds (perhaps thousands) of protestors from around the country converged on Lima. The marchers’ self-described intent was to “Take Lima.” The protestors took to the streets in the downtown area, setting fire to a historic building and leaving five families homeless and another 14 families unable to reenter their homes due to smoke damage.

Throughout the day-long marches – the city of Lima came to a standstill, with police and protestors clashing in several neighborhoods, including the predominant tourist area of Miraflores. As a result of the clashes – 38 people were injured, and one fatality was reported.

Throughout the country – from Madre de Dios to Cusco to Arequipa, clashes between protestors and police have resulted in tremendous property damage and over 50 casualties and hundreds of injuries since the demonstrations started in December. At this time, the demonstrators remain committed to their demands: Resignation of the current president, the closing of Congress, the release of former President Castillo and Constituent Assembly, and early elections. However, nearly all of their requests are difficult and, more accurately, impossible for the government to comply fully.

The HBI team is safe. Our Casa Girasoles programs continue to run smoothly, and all the boys and staff are safe and well. The most immediate impact of the protests has been the skyrocketing prices. The cost of most foodstuffs has doubled over the past month. The escalating cost of many goods and services has stretched our budget. Adding to the challenge, road blockades on the PanAmerican Highway north of Ica and to and from the Sacred Valley have made it very challenging for staff to travel.

The government has reported that over $150 million U.S. dollars have been lost in agricultural exports and that “90% of small farmers’ production was spoiled due to the latest road blockades.” Protestors have re-damaged the rail tracks connecting the Sacred Valley of Cusco with Machu Picchu – potentially further disrupting tourism for weeks to come.

What happens next and how the political and social turmoil ends are anyone’s guess. One thing is pretty straightforward – the longer the protests go on – the more long-term impact they will have on the people of Perú. We will keep you posted on all updates.

Thank you for your continued support and all your ongoing concern.