The President of Perú released an Emergency Decree, published in the official newspaper El Peruano. The decree helps to shore up public health and emergency response and states that “those who enter the national territory [Perú] from countries with an epidemiological history will be subject to isolation for 14 days.” Currently the United States is not specifically listed as one of the countries requiring a mandatory 14-day quarantine. Countries specifically listed include: China, France, Italy, and Spain. 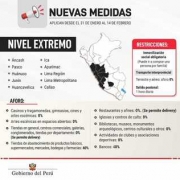