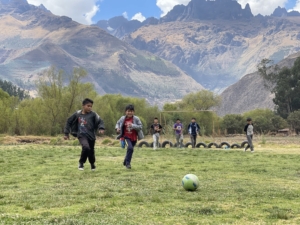 Last week before leaving the Sacred Valley of Cusco and the Casa Girasoles, I was sitting in one of the most beautiful places in the world. The sky was filled with pillowy clouds and the voices of the children playing resonated all around me. I truly love that place.

One of the boys came over to sit down with me. He was very curious about what I was doing. I explained that I was communicating with the other Casa Girasoles in the city of Ica. He expressed genuine interest when I told him other boys like him lived in another house called Casa Girasoles. He wanted to know what the boys were like. We wanted to know what the home they lived in looked like. He asked about the games they played and the food they ate.

We talked for around 10 minutes, and he said, “I didn’t know there were other boys like me.” The thought of other homes and other children living in similar situations and circumstances as himself was difficult for him to comprehend. He wanted to know more about me and why I was involved in helping. He genuinely wanted to learn more about the world he lived in and around.

I got to thinking after our interaction. He was building links in his chain of understanding. He was connecting the story that is his life. He was making meaning.

The conversation with my friend got me thinking about what we are doing in our efforts. Our role is to help the boys find the space and place to make meaning of their lives. Our work is about assisting them in fitting the links into their chains. Our efforts are more extensive than helping one child . . . we are helping to build the bonds that will empower futures and advance care delivery. Our efforts are about systems change and shaping models that can impact generations and revolutionalize child welfare.

Wow, what a humbling role. What an important responsibility.