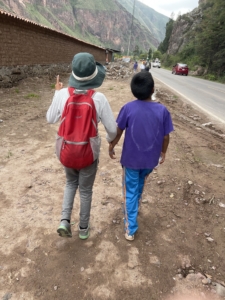 José (not his real name) never thoroughly talked about his family. His only statements were, “No one should ever be treated like I was. No one should feel the pain and loneliness I felt.”

At nine years old, he came to live at the Casa Girasoles. Nothing came easy for José. Formal school was a great challenge due to his learning difficulties. He struggled with the rules. He had a difficult time making friends with the other boys.

One thing stood out about Jose from the very beginning – his perseverance. He was never a boy to give up. If things got hard, he would work harder and figure out a way. When he left the Casa Girasoles program, José quickly got involved with the perils of life on the streets of Lima. He spent most of his early adult years in prison.

At 29 years old, we reconnected with José through our Comunidad Girasoles program. After spending seven years behind bars, he had just been released from jail and had nowhere to go. Through our case manager, he was set up with a place to live, a food stipend, and computer and phone access.

Still – things were not easy for Jose. He had a complicated relationship with his ex-partner, the mother of his daughter, and he was having difficulty finding work. He struggled with substance use.

Slowly, he began to find a foundation for his life. He engaged with a mental health therapist and worked to understand the impact of trauma and adverse experiences. He built a purpose around his daughter.

Things aren’t easy for Jose. He struggles with relapse. He finds it hard to navigate the daily challenges of rebuilding his life. Yet, José perseveres. The team supporting him perseveres.

We are thankful for the support you provide to Jose. He is made whole by your generosity.