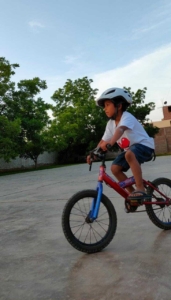 One problem has been not enough bikes for all the boys. We’ve never been able to amass a large enough bike inventory so that all the boys can ride simultaneously.

Well, that is changing . . . thanks in significant part to the generosity of Oregon Bicycle Attorney, Mr. Hugh Givens, Mr. Kevin Chudy (Bike-n-Hike bike stores), and Mr. Mike Colbach. Thanks to these fantastic folks – and many others – we’re amassing an inventory of bikes that will allow every boy to ride (and race)!

On our 2022 Gravel Adventure Camp week – check out this video – the great team from Oregon Bicycle Attorney delivered brand-new Specialized mountain bikes. To add icing on the cake, a wealthy family in Ica heard about the bike camp and read an article that stated we still lacked bikes for the smallest boys – and, well . . . they donated three scoot bikes.

Bicycles are more than a mode of transportation or exercise for the Casa Girasoles boys. The bicycles we have received are therapeutic interventions. When the boys are on their bikes, they connect differently. They open up. They heal.

We are so thankful for the bikes. We greatly appreciate all the support we have received to develop the Casa Girasoles Cycling Team and create a whole new pathway of healing for the boys.