Resilience is the ability to bounce-back. To pick-yourself up and keep going. Finding resilience 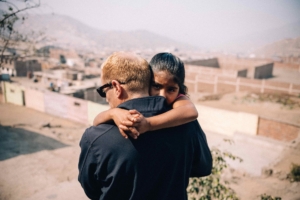 can be very challenging in difficult times. That is why we need one another.

We started the Ines Project with the idea that helping families living in deep experiences of poverty and living with children with disabilities connect to the knowledge and skills of health systems navigation and self-advocacy, leads to better health outcomes. A simple idea – but very complex to implement.

When Taby (not her real name) was 13 years old, she nearly died. Taby was born with Cerebral Palsy (CP). For most of her childhood, her CP was complicated by a lack of access to health services. Taby and her family live in a rented wood shack in one of the poorest areas of the sprawling shantytown of Nuevo Pachacutec on the outskirts of Lima.

Gaby has come a long way since our team first met her. That first day was one of the hardest we have ever had. You see Taby not only had CP, she also had tuberculosis (TB). TB is treatable, with or without insurance; however, at the time we met her, she was not receiving any treatment . . . for her TB or her CP. She was literally dying. She had not eaten for over a week. She was not lucid, had a very high fever, and a fractured spine from an aggressive form of TB that infects the bone.  She was dying . . . at 13 years old.

Perhaps the worst part of all, her Mother had given up. Her mother stop feeding Taby. She was no longer drinking, and had not gone to the bathroom for three days. Our team pleaded with the mother not to give up. To take Taby to the hospital. We told her we would accompany them and stay throughout the process – and beyond. We talked with Taby’s mother for hours. She could not be turned.

She was tired of the doctors yelling at her for not caring for her daughter. She was tired of people’s pity. She was anger with the mistreatment she received from the nurses and doctors, and the lack of empathy they expressed for her daughter and her family. She was tired of having to beg her daughter to eat, tired of carrying her to the bus stop, to be turned away by the driver because – “we don’t take people like her.” She could not afford the taxi fare to the hospital. Taby’s mother told us their lives would be so much better, and Taby would be better, if she just “went away.”

That day, the whole team broke down in tears. However, after countless hours something shifted.  We were able to convince her to meet our nurse, Fanny, the next day at the hospital. This began an amazing recovery not just for Taby, but the whole family. With the compassion of our Ines Project team, we walked beside the family to guide them through that rough day at the hospital. We helped Taby re-enroll in a state sponsored TB treatment program, and give hope to a mother that had no more.

It’s been nearly 10 years since we first met Taby. She is now a happy young adult. The family stills lives in deep poverty and Taby has ongoing healthcare needs – but now they have the knowledge and skills to navigate their own future.

HBI no longer runs the Ines Project. Like all of our work, the goal from the inception of the project was to create a model that any organization could adopt. We’ve transitioned the Ines Project to our partner the Anglican Church of Peru. The project taught us so many things. Most of all it showed us the power of connections to restore resilience. We are so thankful for resilience.

Donate Today and Help Build Resilience in the Children of Peru